I probably shouldn’t admit this in public, but here goes: I am the worst-read fiction writer you have ever met.

In my defense, it’s not because I’m lazy or don’t enjoy fiction. It’s the opposite: I enjoy fiction too much. I get sucked into the world of the novel; I can’t put it down, and even if I force myself to because I need to Adult, it sits there in the back of my mind taking up emotional RAM until I’ve finished it. So reading is a huge emotional commitment, and this makes me very wary of getting involved. Even worse, this is true even if I hate the book. Last week I wasted an entire Saturday afternoon reading 245 pages of a 304-page new novel by a famous Jewish writer who shall remain unnamed before finally forcing myself to skim to the end. Suffice to say, it was not to my taste. But I couldn’t stop reading it because I kept hoping it would redeem itself. You’d think that after 200 pages I would admit defeat and realize that that wasn’t going to happen, but noooooo.

Anyway, I’m telling you all this to explain why I recently read Anne of Green Gables for the first time in my life.

And why, you may be wondering, am I telling you about Anne of Green Gables?

Because one of the first things we learn about Anne–an archetypal free-spirited redheaded orphan girl–is that she uses her rich imagination as a coping mechanism.

“When we got on the train I felt as if everybody must be looking at me and pitying me. But I just went to work and imagined that I had on the most beautiful pale silk blue dress–because when you are imagining you might as well imagine something worth while–and a big hat all flowers and nodding plumes, and a gold watch, and kid gloves and boots. I felt cheered up right away and I enjoyed my trip to the Island with all my might.”

Fantasy as a Coping Mechanism

I’ve always used fantasy this way. All children do to some degree; it’s a crucial part of their development called “imaginative play,” and we worry about them if they don’t do it.

While it’s charming in a child character, however, we’re expected to be “over it” by the time we’re adults. “Be realistic.” “Don’t get your hopes up.” “You’re living in Lalaland.” Maybe it’s because losing touch with reality is pretty much the definition of psychosis, and no one wants to be pegged as insane. Or maybe it’s because people are afraid to be seen as suckers or fools for allowing themselves to entertain an unrealistic notion.

Somewhere along the way, though, I realized something:

When I was a little girl, I used to pretend I was a magical mermaid princess. The fact that I allowed myself to live in that fantasy for extended periods did not mean I ever expected–or necessarily wanted!–it to come true. As a teenager I liked to imagine, as I walked down the street, that when I turned the corner, I would see someone standing there who I was dying to see–J. K. Rowling, for example, who was my personal heroine at the time, or a dear friend I hadn’t seen in a long time. The fantasy of this magical encounter filled me with joy. But I wasn’t necessarily disappointed when I turned the corner and there was no one there.

As an adult waiting for a response to a full manuscript request from an agent, I would find myself wanting to fantasize about that agent calling me and telling me she loved it and wanting to represent me. But I was terrified to let myself live in that fantasy for any period of time because I was afraid that doing so was an admission that I believed it could happen. I was afraid that when that rejection arrived–and I knew it was very likely to be a rejection–I would feel even more disappointed, and angry at myself for even allowing myself to entertain the expectation of any other outcome.

But that’s the thing. This is exactly where hope differs from expectation. I realized that I could fantasize about getting that phone call without expecting it to come true. I could imagine every single delicious moment of it completely divorced from the need for it to actually happen.

This goes way deeper, by the way.

So much of what we perceive as reality is actually in our heads to begin with. You may have heard that a significant portion of our field of vision is a projection by the brain making up for our eyes’ natural blind spots. That means that even things we think we see with our physical eyes are made up of some educated guesses.

So too with people we know. Our perception of the people we know and love is also made up of countless predictions and assumptions we make about them. We can never really know anyone the way we know ourselves because we can’t read their minds or live inside their bodies. So we build ourselves a picture of who they are based on our interactions and experiences with them–and there may be little resemblance between the version of that person who lives in our heads and the “real” version of that person.

Understanding this was very significant to me because, when I’m feeling insecure, I have a tendency to interpret ambiguous or neutral interactions as being negative. For example, if I sent a friend a question, and she didn’t answer it, I used to automatically assume that this was because the question annoyed her. Thankfully, I eventually realized that the negativity of that interaction was completely in my head, and that I could just as easily imagine that the friend didn’t answer because it was such a good question, she wanted to give it some thought, and decided to sit down and answer it later when she had time, but got distracted and never got back to it.

And here’s the thing that really blew my mind: the assumption I make in this situation might actually be more important than the reality.

When I make positive assumptions about other people, it makes me a much more pleasant person to be around. It’s exhausting to be constantly reassuring someone about your motives. The assumption that my friend likes me overall and generally enjoys hearing from me is not only more likely to be true; my making that assumption, in itself, actually makes it more likely to be true.

Our perceptions and assumptions don’t always influence our realities that way, but I think we often don’t realize how much power they have.

The Benefits of Daydreaming

So let’s get back to the benefits of allowing yourself to daydream about success. Why was imagining every delicious moment of that phone call from an agent beneficial to me even when I knew it wasn’t likely to come true?

I answered that in this post about how to survive the wait for a response to your submission:

Science tells us that experiences that take place only in our minds can have the same or very similar effects on our brains as the real thing happening. Martial artists who practice kata (forms) in their minds actually improve their technique. And if there’s a decent chance that what you’re going to experience when you get a response to that submission is the disappointment and sadness of a “no”… why not give yourself a chance to experience the excitement and joy of a “yes,” even if it’s only in your imagination?

But if you make the excitement and hope part and parcel with the experience of submission, you are much more likely to keep at it.

That’s the beauty of being in the place of not knowing. Torturous though it may seem, the period between the moment you send your submission and the moment you receive that response is an expanse full of possibility. Why not allow yourself to indulge in its sweetness before it’s replaced with certainty? 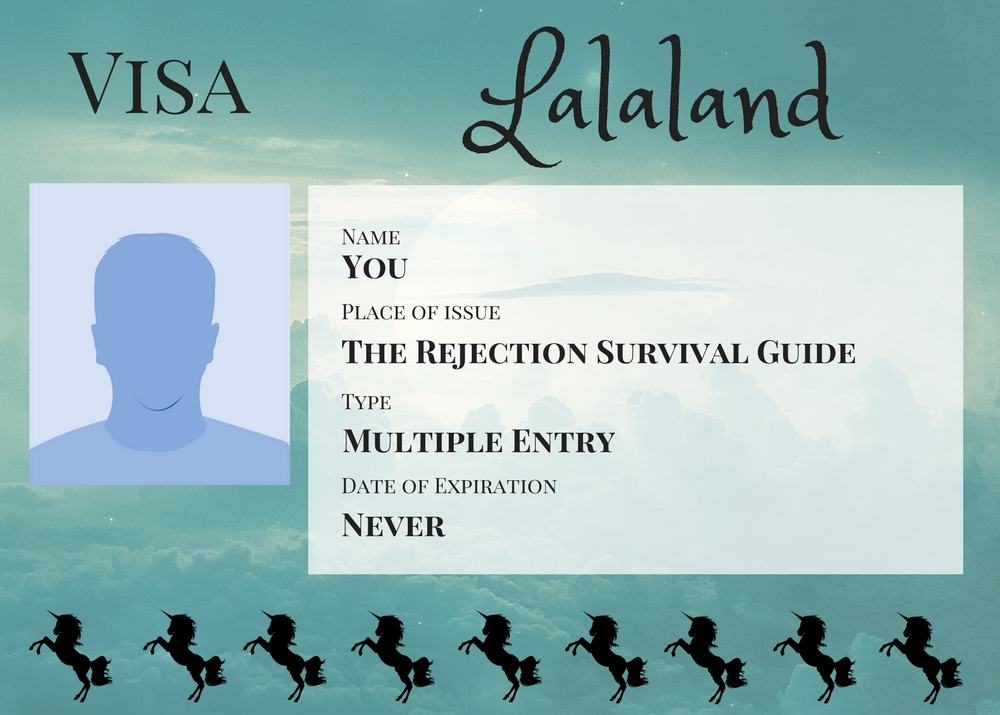 Do note: I’ve issued you a visa, not a certificate of residency. You should feel absolutely free to visit Lalaland and bask in its sunshine on a regular basis. If you find yourself spending more time there than in reality, however, something is wrong with your reality and you may need help restoring the right balance.