Supporting other writers is one of the golden rules of the writing community. I’ve seen sooo many articles and Tweets along the lines of, “Other writers are not competition! They’re your support network! There’s enough room on the bookshelves for everybody!”

Well, I would contest that last bit–depends what sort of bookshelf–but it’s beside the point. The point is that writers don’t need to step on each other to get to the top; we can lift each other up, help each other out, and everybody benefits. This is all true.

If I may bring up a rather uncomfortable point. (I mean, that’s… kind of what I do. Welcome to the Rejection Survival Guide.)

I’M SOOOO JEALOUS OF OTHER WRITERS.

There, I said it. 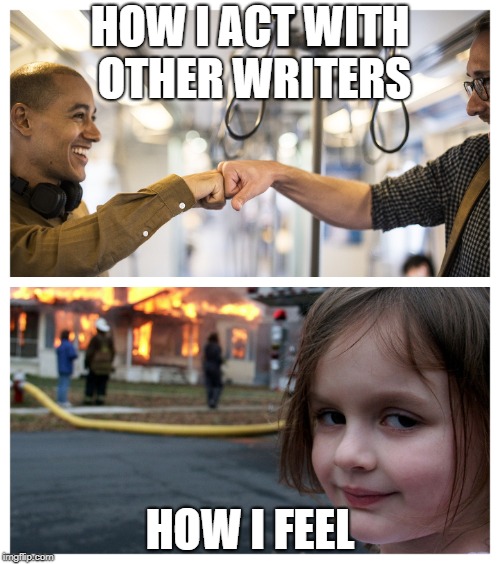 I’ve written about my jealousy of more successful writers before in How to Not Strangle People Who Are More Successful Than You, but the truth is, I get jealous of less experienced writers, too! I might notice writers who are just starting out and have just started sharing their work, and I get this really ugly feeling that at first feels like haughtiness, but when I examine it more closely, I see that it’s just more jealousy in disguise.

I break it down to two categories:

Goes like this: I see an emerging, yet-unpublished writer posting about his writing, getting encouragement from friends to submit, etc. And my first reaction is, “Hmph! He thinks he’s hot stuff, hmm? I shall now pick apart his writing to make myself feel superior.” Second reaction: “Okay, that’s immature. Aren’t I supposed to be supporting emerging writers? How would I feel if I knew someone had done that about my writing when I was just starting out?” Cue guilt. Deep breath. “Am I… jealous?”

Why the hell am I jealous?!

Well, I wrote in How Not to Strangle etc. about “unpacking the jealousy”: “Jealousy is made of hurt, anger, and fear. Ask yourself: what hurts about this? What is making me angry? What am I afraid of?”

What Hurts About This?

What hurts about seeing someone just starting out?

Well, I think it forces me to look back at my own path and see how hard and how frustrating it’s been. Ideally, of course, I would look back and be proud of all I’ve accomplished, but I can’t ignore that there’s been a whole lot of pain involved, and some of it is still raw. Sustained rejection can build you, but it also scars you. There is bitterness.

And I think when I see someone else starting out, what hurts is that I don’t see them suffering like I did. And that makes me feel like my suffering was in vain. It hurts to think that other people may have it easier, and that you may have to work a hundred times harder than someone else to achieve the same result.

What Is Making Me Angry?

I would say that nine times out of ten, the need I have that’s not being met and is causing anger is this one: I need to feel seen.

That is, I need to feel that someone is recognizing, acknowledging, and caring about me, my feelings, my struggles, my needs, my desires, and everything I’m dealing with and going through.

This kind of sucks, because this need directly conflicts with an emerging writer’s need to not have other people impose their stories on them. It’s a crappy thing to do. There’s a fine line between giving someone information and making sure they’re informed, and putting them down and stamping on their dreams just to make yourself feel better under the guise of “helping them out”. What if this writer is going to find an agent with little effort and become successful where I have consistently failed? How dare I discourage them for my own selfish purposes?

This is a recipe for toxicity. And for acting like a jerk without realizing what I’m doing.

So the solution to this situation is for me to process these feelings elsewhere. I have found myself raining on people’s parades; it can happen sometimes when I don’t mean to. But once you catch yourself, stop. Back up. Clarify that you’ve been talking about you and not about the other person, and say something encouraging. Then take your baggage and unpack it in a more appropriate and less harmful context. Preferably with a good friend who can empathize and validate your need to feel seen.

What Am I Afraid Of?

Well, self-doubt demons? I’m sure you can answer this question quite well:

That I’ll never succeed. That I’m actually a failure. That people will see the contrast between this person’s promise and my failures. That they’ll achieve with ease what I failed to achieve with years and years of blood, sweat, and tears. That they’ll do everything I’ve done, but better. That they’re doing it “right” and I’ve been doing it “wrong”.

I’ve written before that jealousy is also an opportunity to connect with our desires and hopes, to remember what it is we haven’t achieved yet and would still like to. I think in the case of retrospective jealousy, it also forces us to come face to face with the dreams we had to put aside, or how far we’ve come without accomplishing our goals so far, and that’s an unpleasant meeting. But it’s still an opportunity, and a guidepost. It can serve as a nudge to move further toward our own goals, or to examine where we are and why, and take a fresh look at where we want to be.

So first, I want to issue a public apology to emerging writers for the jerk-y feelings I sometimes have toward you. It’s not you, guys, it’s totally me and my own stuff. I try really hard not to express it to you or take it out on you, but if it happens, I’m really sorry; please call me on it! And please don’t see this as meaning I don’t want to hear about your stuff. I do! It’s my own responsibility to manage what I expose myself to and my responses to things. Keep doing what you’re doing!

Second, I suspect that I’m not alone on this, and I think that alongside all the cheerful “We writers love each other and always stick up for each other!” stuff, there also needs to be some space to talk about how to process, rather then suppress, the jealousy or feeling of being threatened we may sometimes experience when encountering other writers. You’re actually more likely to find yourself being a jerk to emerging artists if you ignore and suppress your jealousy. We need to be more open about the fact that many of us feel this way, and that it’s okay–as long as we examine it and process it safely and without stomping on other people.

Do you experience this kind of jealousy? What are some bizarre jealousy triggers you’ve encountered and how do you cope with them? Tell me in the comments!