So, last week I tried something I’d never tried before.

I have a manuscript that has slowly swollen from a collection of short stories to a “composite novella” to a novel of intertwining perspectives. Back when it was still novella-sized, I contacted a literary agent who had liked my work before, to ask her if she had any recommendations about what to do with it, and for some reason simply writing to her gave me an idea for how I could expand it into a novel. I asked her if she’d be interested in seeing it as a novel, and she said yes.

So I completed the project a few weeks ago, and I use the word “completed” with a great deal of apprehension. It’s still on the short side for a novel–coming in at just under 50K words–and I worry that’ll make it a tough sell, but I also know myself, and I know that my manuscripts tend to swell with revision rather than shrink (as I mentioned in this post). I sent the revision to a friend who hadn’t read any of it before, and she gave me very encouraging feedback. Then I had to decide whether to get back in touch with the literary agent. Was this piece as ready as it could be? What if 50K isn’t long enough?

At the beginning of last week I happened to notice that there was going to be a #DVPit Twitter pitch contest on Wednesday and Thursday. I had heard of these things before: you post a Tweet-sized pitch for your manuscript along with the hashtag of the contest, and agents and editors scan the pitches under that hashtag. If they “like” your pitch, it means they want you to submit to them. When I first heard of this, frankly, I thought it was kind of a dumb idea. A Tweet-sized pitch is a very poor gauge of the quality or appeal of a project. And it’s not like you can’t approach those same agents with a query letter. If anything, it just adds a step.

But this time, I wondered if it could help me get a feel for whether there may be a place for this project on the mainstream market. I’d been poking around a little, trying to research agents, and promptly remembered what an annoying and frustrating endeavor that can be. Maybe I could save myself a little of the trouble? So I decided to give it a shot.

Turns out, Twitter pitch contests are rather a different animal than the old-fashioned querying method.

For one thing, it totally screws up my rejection chocolate reward system! 😛 (I have a chocolate for every rejection I receive. But what counts as a rejection in this scenario?!)

For another thing, when you send a query letter, you may have some moments of anxiety before and after you click “send” (or drop it in the mailbox, if you’re really old-school!) but then you know you probably have several weeks, if not months, before hearing back, so you return to your regularly scheduled program. With a pitch contest, you basically spend 12 hours of your life gripped in terror–probably a few hours before, too, if you’re like me. Anticipatory anxiety for the win!

Most importantly, no one else has to know that you sent a query letter. If an agent (or agent’s assistant) ignores your query or sends a rejection, you are the only people in the universe who will know this information unless you actively choose to share it with someone.

I decided that chocolate was in order right at the beginning, just for having the courage to do this incredibly vulnerable thing. And that if I got no likes–two chocolates when it was over.

Okay, rejection chocolate system in place. We may now proceed.

The contest ran from 8am-8pm EST, which meant 3pm-3am for me. You may post a pitch up to six times during that period, so I figured out how to automate two pitches to go out after I went to bed. But at around 3, 5, 7, and 9, I posted them myself. At 3:30 I checked in on my first pitch.

No likes. Ouch. Was I getting lost in the shuffle, or does my pitch just suck? Maybe my project is totally of no interest? Maybe I’m insane for thinking anyone would want to take on a book that is so highly political and demanding of the reader because of its many perspectives?

In Which I Take My Own Advice

So the first thing I did was scour the archives of this blog!

Then I sent off a Rejection Survivor Interview to someone who had offered to do one and I’d forgotten to follow up with–in the spirit of taking a step toward new projects I’m excited about. (It should be up later this week–stay tuned!)

Then I had a frank discussion with my self-doubt demons. Is it so bad, I asked them, if no one likes my pitch? Does it really mean that this project has no future in the mainstream publishing industry? Probably not, but what if it does? I still have options, right? There’s no such thing as this book not getting published. That fear is history. Things are different now that I’ve published my first novel. So what if I go with a small press again? I loved working with Kasva. They’ve been beefing up their marketing capabilities significantly in the past few months. We get along swimmingly, and I know they’re interested in this project and have faith in me.

The truth is: I’m not sure.

That is, I definitely want to try. Humans are wired to aspire to new heights. But I don’t know that “staying small” is such a bad thing. Maybe making it big isn’t really for me. What’s appealing about it, anyway? Recognition? I dunno, maybe. Fame? Blech. Money? That would be nice, but you have to make it really big to get any kind of significant income as an author. And there are definitely some things that are very much not appealing about making it big. Like the mounting expectations. What do you do next, you know? What if I never write anything better? (Oh hi, What-If-I-Never-Have-Another-Good-Idea Demon. I believe we have discussed this.) I’ve never been into the instant bestseller type of material and I’m not about to start now.

So then I reached out for support. First from my friend Abi, who is the first person I turn to for all writing-related things (which is why I dedicated my previous novel to her as “the patron saint” of the book). She told me I was being really brave and that this is just one step on this new journey I’ve been on with this novel, that I’ve developed as a writer and have put together something really unique, and she is sure I’ll find a way to get it out there in the right way. She added, “Just think of the blog post that will come out of this experience!” (How right she was! 😉 )

Then, I sought support/information from a group of novelists on Facebook. “On a scale of ‘it means nothing’ to ‘stop writing immediately’,” I asked them, “how depressed should I be about not getting any likes at all on my DVPit pitch?” The answer was unanimous: “It means nothing.” Or as one author put it, in the spirit of “show, don’t tell”: “I got zero likes when I pitched to DVPit two years ago, and got two offers for representation several months later.”

How ’bout them apples, self-doubt demons?

My conclusion was that it was fine to be disappointed, and it was fine to fantasize that I’d get some “likes” before the contest was over, but to remember that the fantasies are just that–fantasies–and I will deal with whatever reality the universe decides to hand me, because all the options are good. I create because creation is an act of love, etc.

Also–no more obsessing over my Twitter notifications. I would only let myself check them when I was logging in to post another pitch.

Maybe I shouldn’t have done this. Maybe I should go back and delete my pitches so my shame is not exposed for all the world to see on my Twitter feed. There are few things I hate more than calling out into the void to no response…

There’s a poem of mine that was published in the Chachalaca Review this past November called Paper Boat (or Barco de Papel. Yeah, it’s in English and Spanish. No, I’m not a Spanish speaker. …It’s a long story). The poem expresses a deep lesson I learned about sending things out into the universe and trusting them to come back to me, in a literal or cosmic sense, if that’s what’s right for me; and if not–learning to let go of them, knowing that what they’ve given me is already a part of me. The paper boat has become my personal symbol of this process because of the imagery in that poem.

I have a few paper boats on my desk. One has the poem written on it. Another has just three words: 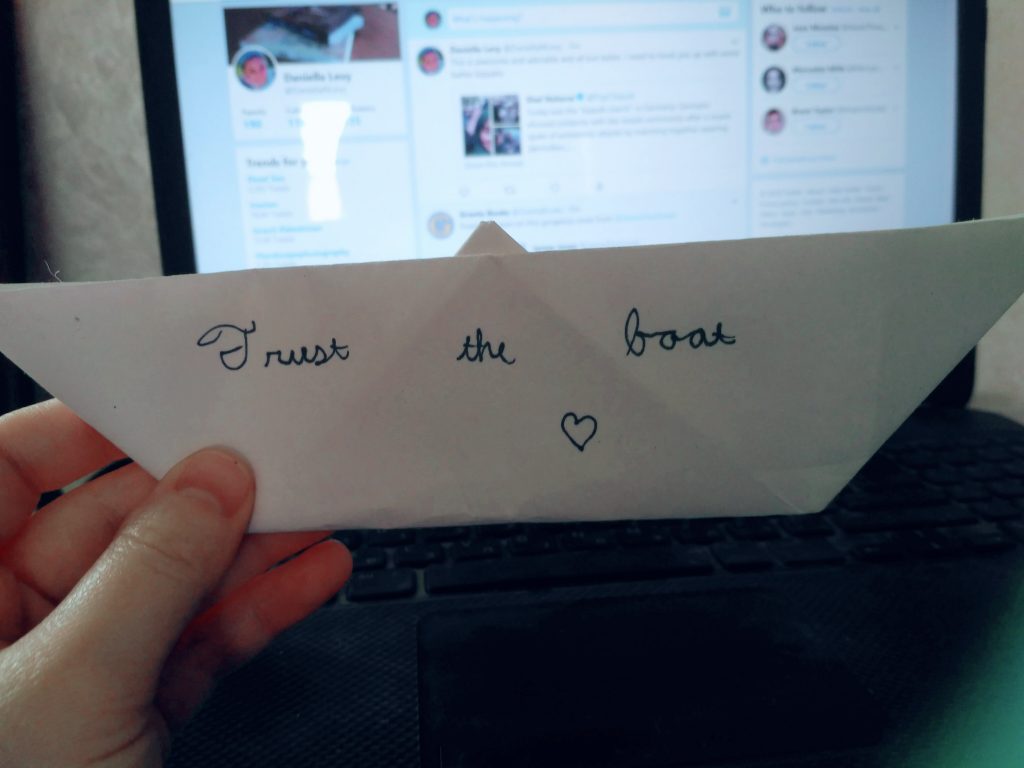 Maybe it won’t come back. Maybe it will. It’s not up to me.

I learned to walk alone along this shoreline

I learned to stop watching the horizon

An agent liked my pitch! An agent I’d been planning to query anyway!

I imagine that if this hadn’t happened, and I’d finished the event without getting any likes, I would have asked myself if this was all a huge waste of time and emotional energy, and I might have reached the conclusion that it wasn’t worth it. And that would have made it harder to move forward. But I know I would have queried this agent eventually anyway. And I would have been proud of myself for trying.

The following morning there was another like from an agent I hadn’t heard of before. I looked him up, read his “about” page, and instantly liked him, and after reading a few interviews and satisfying myself that he was legit, I started putting together my query letters for both of them.

But what if it’s not ready? What if I should wait for more feedback from my beta readers?

But what if Mr. Agent doesn’t respond? He says on his website that he doesn’t respond to every query. But this one is solicited, surely he will respond?

But what if I get more of those heartbreaking “almosts” I hate so much?

Yes, self-doubt demons. Those are things that can happen. They’re even likely to happen. I know; two paper boats came to shore, and I’m about to turn ’em right around and send ’em right back out there. But I got this, my jittery little friends. The future is bright, no matter what lies ahead.